Described by critics as A Game of Thrones meets Star Wars meets Romeo and Juliet Brian K. Vaughan's new series Saga tells a story of two lovers from warring factions who have brought a child into the world.  They meet and overcome strangers and dangers in the unique fantasy/science fiction world in which they live. 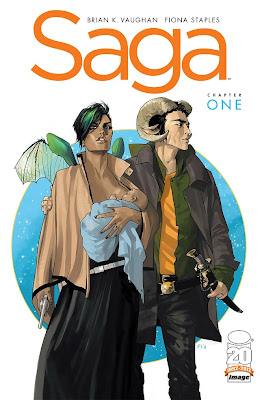 Welcome! This to be a resource for the Adult Graphic Novel Book Club at Koelbel library with selections, dates, and discussion questions. Any and all are welcomed to discuss and comment on the latest graphic novel book club news or graphic novels in general.

All graphic novel book clubs meet the second Thursday of the month at Koelbel Library from 7:00 to 9:00 p.m. For more information, including directions and other library book clubs and programs, click here.

Do you want to get our obscure references and the (mostly lame) inside jokes we make at our book club? Here's what we've read in the past.

February 2011 - A Contract with God by Will Eisner

May 2011 - American Vampire by Stephen King

September 2011 - The Tragical Comedy or Comical Tragedy of Mr. Punch by Neil Gaiman

August 2012 - Saga of the Swamp Thing series by Alan Moore

November 2012 - The Arrival by Shaun Tan